Irish music with a modern twist. The young talents that make up Four of a Kind can pull off some of the most powerful, energetic and danceable jigs and reels one is likely to come across outside of Ireland.

With uilleann pipes prodigy Michael Boere, combined bouzouki-harmonica-player Tijn Berends and swinging bodhrán-beater Suzanne Leeuw, Four of a Kind has exactly the right combination of instruments and temperaments to take their music to the high level of skill and energy that is typical of modern Celtic music.

The three young talents that make up Four of a Kind are well known in the folk music scenes of the Netherlands and Belgium, being regular players at the different sessions, ceili´s and festivals around the Low Countries. It was in fact at such a session that the three of them first met, although it would be several years later before they decided to take the next step and take to the stage.

Over the past few years, Four of a Kind has developed a highly recognisable sound, arranging their songs and tunes in increasingly intricate structures and pouring ever more energy into their music. Performing on festivals and gigs all over the country has allowed them to create a stage act that is alternatingly relaxed and energetic, complementing the unique sound of their music.

Self-described musical mastodon Suzanne didn´t pick up music until her mid-twenties, making her almost geriatric by musical standards. Her solid, powerful rhythms on the goatskin help create the drive that carries the jigs and reels the band play. She maintains that without her maturity and guidance, the band would soon collapse into chaos and anarchy - a gross exaggeration, according to the boys.

At 17 years of age, Michael was the youngest ever workshop teacher at the annual meeting of the Dutch Uillean Pipers Association, leading him to be recognised not only at home but also in Ireland as one of the world´s finest emerging talents. Since then he´s continued to develop his skills as a player, composer and technician, contributing his instantly recognisable individual sound to the music of Four of a Kind. On top of all that, he has very stylish hair.

Tijn firmly denies having ever stated that he only plays with other musicians because he doesn´t have enough arms to play all the instruments himself. Nevertheless he´s made it his personal goal to be able to play a jig on every instrument ever constructed and so far he´s doing quite well. With Four of a Kind he plays the guitar, bouzouki and harmonica.

Unfortunately, we have no gigs planned right now. Thanks, corona! 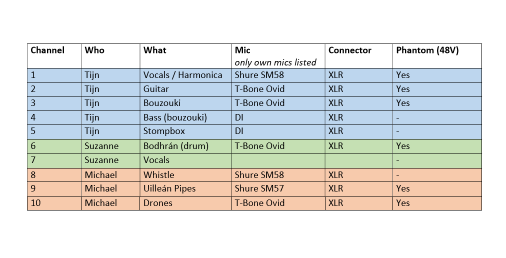 Our very first album is finally here! "Hops & Stops" was recorded in 2019 and released in 2020. Want to buy one? Click the image below to go to our webshop (note: this will take you to a new web page! Not sure yet? Here's what some other people had to say about it:

"Just one word: WOW! If you´re after energetic, fresh, powerful, perfectly arranged, good-mood, happy-making music of the highest level, and like some nice clothing on a cover, this is the album to go! Fantastic bodhrán playing by the fabulous Suzanne. Highly recommended album and band!" - Christian Hedwitschak, builder of Suzanne's bodhrán (www.bodhranmaker.eu)-

"Fantastic individual and ensemble playing, engaging tune variations, and killer sets... this album is sure to be a favorite for traditional music fans everywhere." - Andy Kruspe (www.andykruspebodhran.com)-

"Four of a Kind have done an excellent job here! From the opening track you automatically feel the energy that these 3 musicians fuse together. They have beautifully composed & arranged the sets on this album, with some precision changes and well thought out tunes. With them being multi instrumentalists, you get a really broad range of their musical talent: a full-on mix of pipes, bodhrán, bouzouki, harmonica, guitar & more! Give your ears a feast and grab yourself a copy!" - Seanie McGrath -

Want to get in touch? Contact us through email or telephone: